I taught my dogs through free shaping and games that failure is OK and nothing to worry about. If you do it wrong, you don’t get a reward, but we are still playing and you will probably get it right on the next try, so hurry up and try again!
Similarly, when my training plan fails this is nothing to worry about. It doesn’t mean I’m stupid, worthless, will never be able to train this, have a dog that cannot be trained or any other nonsense that the inner critic tries to feed me. We are still playing and my next plan will probably work better!

I set out to do a few Recallers games in a public place where we usually wouldn’t do them. I brought Ruby out of the car and started tugging, but I could feel his heart wasn’t in it and he even stopped to look around twice. Guess what, if the dog isn’t tugging happily in a certain place you cannot use the tug as a reward. OK, so we were left with food. He was more focused when working with that, but I still felt like I might lose him at any moment. He was on leash, so “loosing him” meant just loosing his attention, but attention, to me, is everything. Since I was fast, rewarded him often and also released often to environment, this didn’t happen, but if I were to lose intensity for a second he would be off to sniff the bushes in no time.

While this would look like a successful training to an onlooker, it was a failure to me, because we are way past the stage where I need to work for his attention (or so I thought). Failures happen and all good trainers are OK with that. They even use them to their advantage. Here are some types of failures:

1. Dog failing at the task. Perhaps failing multiple times. Perhaps not succeeding at all.
2. Reacting inappropriately to dog’s failure because of lack of training plan or lack of knowledge.
3. Inability to get dog excited about training.
4. Loosing dog to the environment (loosing focus & wandering off).

For me, the #3 – inability to get dog excited is the hardest failure to bear emotionally, followed really closely by #4 – loosing dog to environment. These used to be our biggest problems in training and while we don’t get them very often these days, they can still happen as evidenced by my experience with Ruby.

Dog training is an interesting activity. It teaches you so much about yourself, your character, your fears. It can expose your weaknesses like perfectionism, impatience, comparing yourself to others, comparing your dog to other dogs, focusing on the negative, difficulty in expressing joy and approval, worrying about what will others think, wanting to look good, anger, frustration. These were all mine if you were wondering… Some of them in the past, others I’m still struggling with. I probably forgot some, too.

I think it’s amazing that dog training is bringing all of these flaws to the surface in the context where I am motivated to work through them. Sure, it hurts when I bump against “comparing myself to others”, but by working through it I found self-love, appreciation for the journey that is mine alone, and also more love for others. What could be better than that?

I know you have your own struggles, some are with knowledge, others with mechanics and still others with internal critic like mine. You are not alone. Dog training is an unexpectedly emotional experience for most of us.

Look back at the struggles you have already overcome. Perhaps you spent months to teach your dog to play with toys. Perhaps your patience was tested by a puppy piranha. Perhaps you learned to control your frustration better. Perhaps you taught your dog “sit pretty” after 8 months of patient work. You did it!

Remember also that not everything was hard. Perhaps your puppy slept through the night from the time you brought him home. Or he loved food. Or he wasn’t afraid of traffic. Or learned Sit fast. Or you could take him with you for a coffee without much training at all. Every single thing that is easy for your dog is difficult for someone else’s dog and therefore not something that should be taken for granted. When I felt really hopeless and thought that Ruby will never be happy to work with me with other dogs present, I wrote a list of all the things that were great about him, including snuggling 🙂 It helped. 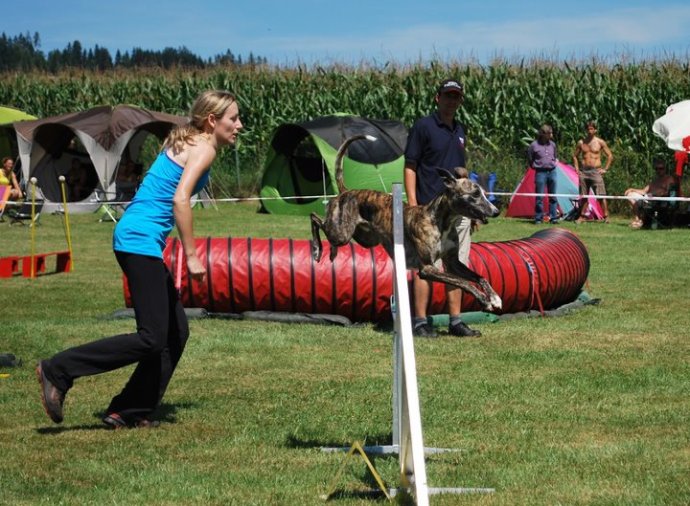 Um… we were supposed to be going in the same direction!

This problem in front of you is just like one of those you already solved. With a little creativity and perseverance it will become one of the problems of the past. If this post reminded you of the problem you have successfully overcome, go ahead and write it in the comments so we can celebrate together 🙂

PS: What do Silvia Trkman and Susan Garrett have in common? They see problems as puzzles, waiting to be solved. They replaced the feeling of frustration with curiosity and a game-on attitude. I came to believe that all great trainers do that – it’s what puts them in the right state of mind to find solutions.

Thanks Monika for Ruby’s agility photo! Those are some great memories 🙂